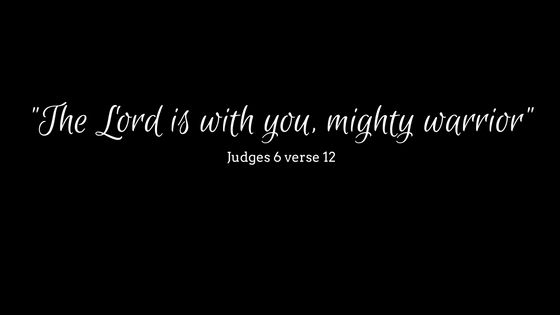 I love the story of Gideon found in the book of Judges chapter 6. Gideon is found by an angel in a winepress hiding from his enemies. God appears as an angel and He approaches Gideon and says “The Lord is with you, mighty warrior” (verse 12). Gideon is hiding, a behavior that doesn’t seem to be very warrior like and yet the Lord addresses him as who God has created him to be and not by what he actually is in the moment. The Lord is calling forth Gideon’s destiny as a mighty warrior.

The Lord tells Gideon that He wants him to go and defeat his enemy the Midianites.  The Lord turned to him and said, “Go in the strength you have and save Israel out of Midian’s hand. Am I not sending you?” (verse 14).

Gideon couldn’t believe that the angel was addressing him as a “mighty warrior”. Gideon doubted his own abilities. He couldn’t believe that God was calling him out to do something so bold and so brave so he needed to hear from the Lord again just to make sure. He had to hear from the Lord not once but three times to be sure that he had heard correctly…

And God did just that. But Gideon still needed more confirmation so he asks God if he can ask Him one more time to do the opposite of what had just happened and of course God answered his requests and did it again.

God was patient with Gideon because God had chosen him to defeat the Midianites, Gideon did not yet recognize that in fact he was a mighty warrior, the Lord called forth His destiny and He strengthened him and went with him into battle and Gideon did indeed become the mighty warrior and defeated the Midianite army.

Like Gideon, we are not perfect and nor does God expect us to be. Sometimes we need to be told a couple of times before we get it right, or before we can step out into our destiny. I am sure that the Lord would rather that we ask Him again for confirmation then to do nothing with the word at all.

God is always speaking and He has a message for us. He will do anything He can to get it to us. He is patient and kind and gentle with us in our learning to hear His voice. Do not be afraid to ask the Lord for confirmation on a word or promise that He has given to you.

And then when you have asked for confirmation, listen out for it. Spend time with people who hear from the Lord, they may get a word from God too that confirms what it is you have been asking the Lord about or for. Begin to write all of these words and promises down and you will start to see a pattern in the things that the Lord is saying to you.

The Lord has a message for you. He is trying to call out the destiny in you and He is doing everything He can to get that message to you. Do not be afraid to ask Him again, He will answer you and then you can begin to step out and into your destiny as the mighty warrior He is calling you to be.